Acadia lived a Happy childhood on her Home planet of Darah but it ended all too soon when her parents died a mysterious death. Acadia filled with anger, a warrior was aroused in her. As a celestial being, she can control light and matter. After her parents death she mysteriously got a little more powerful. For a few years she was taken in by a foster family but they treated her horribly. One day in her foster home she made a huge mistake in which for punishment she lost sight in one of her eyes. Acadia still had hope that justice would be served and for a better life. Eventually when she turned 13, the King of the Solar system had heard about this amazing teenager that had the True heart of a Warrior. So He Took her in and treated her like his own. At 15, she became the admiral of his army. Acadia now had part of her Wish come true, a good family but one thing still remained.. Justice, for the wrong done to her and her parents.

While She was in one of the kings spaceships she found a cute little blue and green planet so she flew down and decided to check it out. She found that its name was Earth and found it very welcoming at first. Acadia still has a mixed opinion about it. She noticed how the humans can be Good and Very Bad. she was disgusted with the mistreatment of animals but touched when she saw a nice girl holding a cat and feeding it. But what made her smile, wonder and be intrigued by was the Guardians of the Strange planet.

Man in Moon saw a Guardian in her and made her the Guardian of Power which Acadia gladly accepted. When She learned about the Evil Guardians it didn't bother her cause she could relate to them. Deep inside she feels sorry for Pitch cause of losing his family but, when she heard that he found his Wife Acadia smiled. The Good and Neutral Guardians inspired her too, knowing that we All have a story, hoping for a good ending.

Acadia is a generous person, but sometimes seems like she is hiding something. Being a Celestial being and proud of it she hold her head up high and still treats other races with kindness.

Acadia can Control Light and Matter. what Weakens her is Anti-Matter.

When Acadia is Angered enough she turns into her dark form its is a reverse of her self the eye patch is on the other eye and instead of wearing mostly white its turns all black, with a touch of blue. Her sword even changes to a dark form of its self and she is powered by Dark Matter.

Good and Neutral Guardians: Acadia is Cool with them and finds them very inspiring.

Evil Guardians: She relates to them. Some times she might meet at odds with a few of them but has no Hard feelings against them at All.

(I will add More relationships for this cool chick Later xD)

"The Guardians are Very cool, All of them."  (Acadia to Valentina Love)

"It's one of the laws of the universe Aurora you know that."  (Acadia to Aurora) 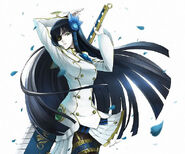 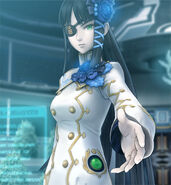 Acadia in her adopted fathers spaceship

Acadia in her Warrior Queen State

Acadia's Quote: "A Hope in my hand that's all I take with me" 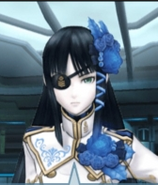 Add a photo to this gallery
Retrieved from "https://rise-of-the-guardians-role-play.fandom.com/wiki/Acadia_S._Andromeda?oldid=162165"
Community content is available under CC-BY-SA unless otherwise noted.