"Want to turn the world asunder? Then you have just made a huge blunder"

A man gifted with the power of the 8 elements of the world. He was Merlin's friend and also his rival in terms of magical sorcery. Though looking like an evil wizard, he is actually gentle and kind hearted, he speaks words of the past and some wisdom upon the people and enemies he meet. Though he can be hardy and prideful once in a while due to his warlock nature.

He is also the adoptive father of the Sisters of the Trinity, before he died, he passes 6 elements onto his little daughters. Minerva, with the will and strength of a warrior but also the potential to become a powerful sorceress, he passes down the element of Lightning and Fire so many would come to respect and fear her nature.

Nirvana, gifted by grace and absolute beauty, bestow upon her the element of wind and earth, so that the winds' gentle and calm breeze would be guided across the world, and the earth endlessly looming over all.

Finally, Siliviria. The youngest of the three sisters, with his last breath he bestowed upon her the gift of ice and water. By her mercy and joy she shall take care of mankind and keep all dangers away from the sight of mankind.

During his youth, Curaser was an eccentric young man. Dabling in the elemental arts, many wizards saw this opportunity and many would like to take him. Curaser disagreed to their offers until a wizened wizard named Gaius came for him.

He offered the chance to let him study further to his own power, give him a lab, a home, and a chance for peace from everyone. He reluctantly agreed to the offer, there they set off towards a magical tower. Curaser would see that there was another apprentice, Merlin.

At first, they didn't like each other, not one bit. But as time goes by, they start to hang out and study with each other, they became like brothers. Though, one night when the moon is full, Curaser would hear ghastly and horrible voices coming from the moon. He tried to ignore and stay away from the temptation.

Night after night after night they called out to him, until he became power hungry and investigated it himself. He would travel toward a moon shrine and dug deep down below, there he saw a temple brimming with black light. It was a religion about worshipping a "god" in the dark side of the moon. A shadowy figure would came down from the moon and talked to Curaser, he made a pact with him that ultimately led him to achieve all 8 elements, including shadow. Though the cost was immeasurable, he murdered his brother, his father, his mother, and thousands of innocent people on a city.

Curaser have all the power he wants and needs, but there was a catch to all of this. By making a pact with the "god" of the dark side of the moon, his history that shrouds about him will fade in time. Little by little, he would be forgotten as a make up fairy tale that parents tell them to their kids. Angered but shocked, he argued with the being but the pact is unbreakable, he regretted that day and now burdened with the sins of his own lust for absolute power.

During the Magic Ages, the first warlock was born and gifted with incredible powers. Harnessing four elements at the age of 7, he was one of the most astounding young wizards in entire land. He met a wizard named Merlin when he was a young lad of 15, together they made impossibilities into reality and written themselves in history's power.

Unlike Merlin, Curaser grew desperate. Needing more power, in time he began dambling in the dark arts which grew him more powerful, he killed and murdered thousands of people to gather four more elements. At one time, he met Merlin once again, he pleads for him to stop but he will only stop for a duel.

They both battled with power and intelligence, though sadly for Curaser, Merlin won in strategy and power. As the battle ends, he took up the bargain and fled, he would create a spire made entirely out of light and shadow. He made an invisible forcefield so that no one would ever disturb him again.

Many years have passed, an unknown cry would be heard outside his spire. He came to look at it and saw three little girls, he looks around and analyzed the barrier. No one got in nor out, he got confused but as he looks at the three, he felt something inside him. Thus he took care of them.

For many years he has been the father of three potential witches, he taught them about all he knew in the sorcery of dark magic and elemental magic. They would smile, care, and love each other for a long time. They were a happy family and Curaser thought this will be his doing in atoning for his sins, until the King of Britain came and destroyed his home.

The three sisters were about to be executed by the King's soldiers until Curaser voluntered that he be executed instead of them, the King agreed and at midnight where the moon is full, his body was mutilated, broken, boiled, and burned until the sun rises. The sisters would cry their hearts out but Curaser was still alive, barely breathing. Before his death, he gave them their natural affinity for magic of each of their own choosing. He remains with the powers of Light and Shadow, he look onto his daughters and smiled. He died, knowing his children are safe and has been judged for the sins he have commited all these years.

Nirvana - One of his three adoptive daughters, though she clearly enjoys gracefulnnes and serenity, Curaser thinks she's a bit moody for a girl but nonetheless he loves her.

Siliviria - His most beloved daughter, her peacefulness and mercy to others made him love her very much. Relating him to a peace that is loved by all.

Curaser is a powerful tharmaturge warlock, dishing out plenty of elemental power and capable of dealing devastating spells in a wide area with ease.

Elemental Mastery- Even though he gave his powers to his daughters, he is still capable of wielding Fire, Nature, Earth, Wind, Water, and Ice. He can use someone's elemental power against them and use it to his own advantage. He currently possess the powers of light and shadow, it adds up to his defensive stance and also he can combine two elements to create a much more powerful spell than the original.

Technological Advancements - Due to the futuristic passage of time, Curaser was able to create dark orbs made out of shadow and metal. He uses them to dish out enchanced light beams into laser beams and further improved his power over light and shadow.

Lunarian Form - Curaser would fully call upon the power of the Moon to become a being of light, he can dish out light based attacks and projectiles along with healing his allies using holy moonlight.

Abyssal Form - Curaser would let Kiserion infuse with him, both of them becoming as one being. He can fully use the power of darkness to corrupt, decay, and destroy his foes. He can also drain the life out of any living individual to further improve his power.

Summoning - By the power of the shadows, he can summon his familiar and the one who made a pact with him, Kiserion. Three times bigger than any ordinary dragon and can shapeshift to anything he wants as long as he can touch it.

God of the shadows, ancient eldtrich horror of darkness, this creature was once the benevolent Moonlight God of the Elves and the God of healing. His followers corrupted by the ancient celtic ways, they turned against him and worshipped many celtic gods. In return, Kiserion became hollow and embodied with darkness. Hoping and swearing for revenge, he sets out to find him his avatar and champion to wreck havoc across his foes.

Able to construct and erase memories, he grows more powerful each time his hosted champion or avator loses on of his/her history to the twilight pact of the ever gleaming yet darkening light of the Dark Side of the Moon.

Kiserion can twist the boundaries of time and make any day turn into eternal night. No stars nor the moon can be seen in the sky, only the vast vacuum of space and darkness.

Being the once Moonlight God and current Forgotten One, he embodies the pure darkness of the moon and also can harness the powers of the gentle light of the moon. Rarely using the light, he bestows his power of light to his champions and avators of his own.

He can shapeshift into anything he wants as long as he can touch one, one touch from the desired creature or construct he can instantly shapeshift into what he desires, though he cannot inherit the same strength and abilities of said construct or creature which desired. 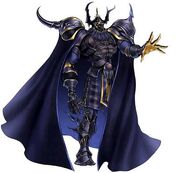 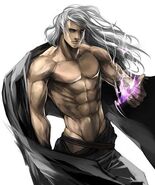 The Man Beneath in Darkness

Curaser likes to speak in rhyme, he sometimes speaks in a normal grammatical sentence.

Curaser comes from the word "curator" while Elemenium means element in latin, in translation his name means "Keeper of the Elements"

The pictures is not mine, it goes to its respective owners

Retrieved from "https://rise-of-the-guardians-role-play.fandom.com/wiki/Curaser?oldid=208745"
Community content is available under CC-BY-SA unless otherwise noted.