Neva Arc is role-played by EternallyFrozen13. She is the Guardian of Death.

Neva is a very manipulative 21-year-old girl. She seems shy and sweet at first, but turns out to be quite rude later. Neva lives in Tomba Gardens.

Neva was once the queen of Spain. She lived a luxurious lifestyle and was married to the love of her life, Sergio. When there was a sudden attack from the French, Sergio and Neva were arrested. Sergio was sentenced to death after spending 10 years in prison. Neva was set free, but worried about him. When she found out about his death, she went mad and became an evil queen.

Janus Chance - Neva is extremely annoyed by him. She hates it when he calls her "girlie." In return, Neva calls Janus "Ash Eye." 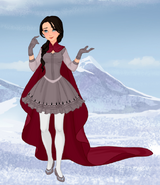 Neva's Old Design
Add a photo to this gallery
Retrieved from "https://rise-of-the-guardians-role-play.fandom.com/wiki/Neva_Arc?oldid=162181"
Community content is available under CC-BY-SA unless otherwise noted.